You could soon be seeing farms in the sky instead of on the ground, if one group of award-winning architects has its way.

By 2050, the world’s population is expected to grow by three billion people and agricultural land and food could become scarce.

So one London architecture firm has taken it upon themselves to reinvent the traditional farm as we know it, and solve the future shortfall of farmland and avert a potential food crisis while they’re at it.

At the top of the tower there are wind turbines and water tanks. Photo: Rogers Stirk Harbour + Partners 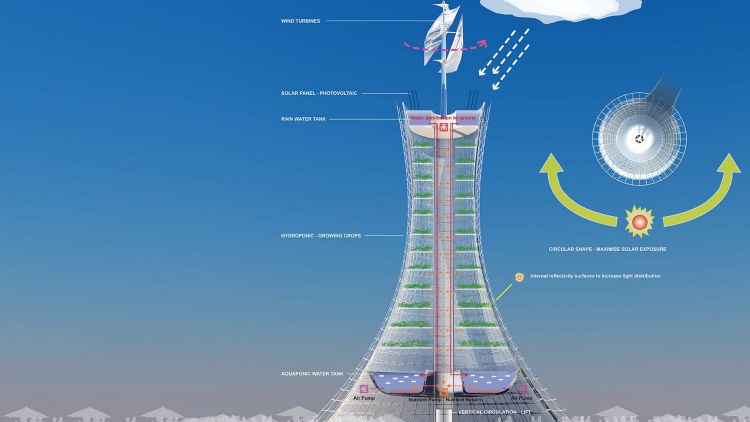 Architects from Rogers Stirk Harbour + Partners designed the ‘Skyfarm’, where crops are grown in a high-rise tower that can be built in the middle of a city. It’s a way of creating space for farming in an increasingly built-up urban environment where there is either not enough land or the quality of soil is poor.

The concept, which originally started as a research project, has just won the Sustainability Award at the Architectural Review MIPIM Future Projects Awards 2016. The tall structure, created with light bamboo, is the shape of a science beaker to allow maximum exposure to the sun.

In the middle of the structure is an aquaponic system where plants are grown alongside fish. According to the Rogers Stirk Harbour + Partners, “nutrients derived from fish waste are fed to the plants and the plants provide filters for the fish to thrive in.”

The building’s design allows for a marketplace or restaurant on the ground level “to encourage the public into the farm and act as an education space or social hub.” From the base of the building, you would be able to see the farming process with fish swimming in a transparent tank above.

According to the architects, the hourglass shape of the structure would allow it to be scaled to adapt easily to different environments.

“A 10-metre version could be constructed in a school, or an 80-metre farm built in a larger urban area.”